New eBook: -"How To Determine When A Reversal Is Going To Take Place" - Click here for more

After making another new high a couple of hours ago the price of EUR/USD is now falling and we might be seeing the start of a move lower.

You can see how after making a new high selling started to enter the market in the form of bearish engulfing candles. These engulfs could be the banks placing sell trades, for this to be confirmed we need to see the market break the low which I’ve marked in the image. A break below here would signal further downside movement and would also mean the supply zone which I’ve drawn from the bearish engulf that appeared earlier will become valid for looking for trades.

Currently we are seeing USD/JPY fail to break past the highs made yesterday after hitting the stops which had built up near the swing high.

The buy stops which built up above the swing high ended up being hit and managed to cause a slight move lower. The move lower seems to have caused a large number of traders to enter short trades as evidenced by the fact that a large percentage of sell stops have accumulated above the swing high marked with an X. 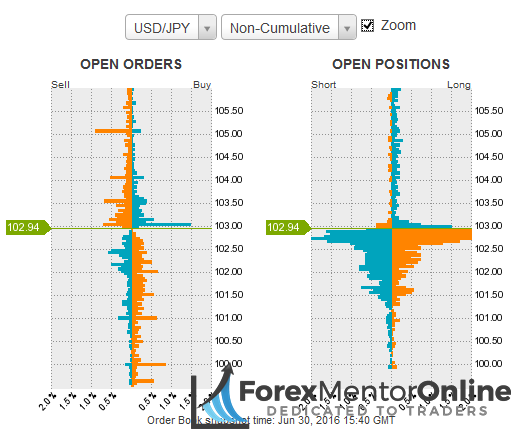 On the open orders graph we can see how a high number of buy stops have built up just above the 103.00 level. This level is right above the swing high which I marked, the traders who’s stops these are must have thought the swing high was a good place to put their stop when the market was falling.

If we see the market come back up here watch for a pin bar or engulfing candle to form after the stops have been hit. The banks might be placing sell trade around these highs in anticipation of a move lower taking place, if this is the case then the banks will use the buy stops to get lots of sell trades placed at one price.

For now monitor the market for a break of the current high, a break above here suggests more upside movement and that we should begin looking for entries long.