The zone created by the banks placing buy trades was broken by a move lower last night, the sell stops that had also built up just below the zone were also hit and failed to provided any meaningful up-movement.

The market did actually react to the zone but it was only a pause before a bigger move lower got underway. With the zone broken it means the buy trades which the banks placed at the zone to cause the market to move higher have been closed which suggests a fall into the other zone created by the banks placing buy is now likely. 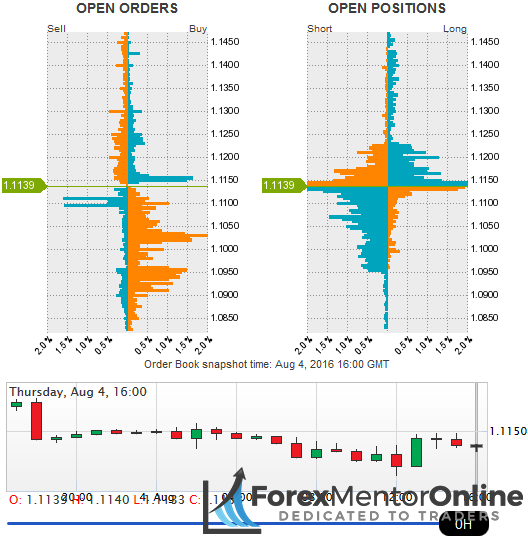 On the open orders graph we can see how both sell stops and buy stops have built up in the market. The sell stops are found near the swing low created earlier today and the buy stops are found by the high of the last move lower. It’s too difficult to determine which direction the market is now likely to move in based on the current price action, on one hand we could say a run into the buy stops is likely but then again we could say a move into the sell stops is probable.

I think for now it’s best to wait for more price action to form before looking for to see whether to go long or short.

USD/JPY is still retracing after the down-move that took place back on Tuesday.

So far there hasn’t really been anything to suggest the market is more likely going to break up or down, this will definitely change tomorrow with the release of the NFP report. If the NFP comes out positive for USD I think the market will rise up past the bank sell zone seen in the image, if it continues to move up beyond the highs at the top of the move down seen on the far left of the image, it’s a good indication the banks are getting buy trades placed to make the market reverse or at least suffer a large retracement.

The demand zone which was in the process of forming when I published my last post ended up being hit and has managed to push the market up past the swing high seen at the top of the move down.

If the market fails to keep moving past the old swing high it could mean the banks have purposely made the price climb higher in order to get sell trades placed ready for when the NFP comes out tomorrow afternoon. The reason I say this is because when the banks are placing trades in order to make the market change direction they will nearly always get their trades placed at prices which are close together.

So if the market cannot continue moving higher and instead starts to fall the swing high they’ll be created will have formed at a price which is close to where the other swing high has formed which means the reason why both highs have appeared is because the banks are getting sell trades placed.